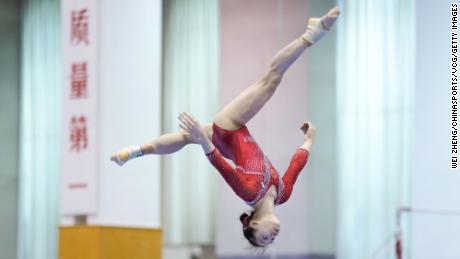 Photo of the Day

Head over heels: Ou Yushan of the Chinese women’s gymnastics team on the balance beam, during Tokyo Olympics trials in Beijing. The team announced its final lineup on Saturday, with the goal to make a comeback after “they endured a history-making zero-gold embarrassment in Rio 2016,” according to state-run news agency Xinhua.

China is widening its crackdown on the country’s ride-hailing giants, citing national data security concerns.
On Monday, the country’s internet watchdog announced a probe into truck-hailing platforms Yunmanman, Huochebang — known as “Uber for trucks” — and job listing site Boss Zhipin, and suspended new user registration for the three apps during the investigation.
In a statement, the Cybersecurity Review Office said this has been done to “prevent national data security risks, maintain national security, and protect the public interest.”
The announcement comes one day after the Cyberspace Administration of China (CAC) banned Didi, the country’s largest ride-hailing service, from app stores after saying it posed a cybersecurity risk for customers.
“Didi Chuxing app is found to have severely violated the laws by illegally collecting and using personal information,” the CAC said on Sunday. It called on Didi to fix the issue with its app to comply with the country’s laws and to ensure its customers’ safety.
Didi, which has 377 million active users in China alone, said in a statement that it is complying with China’s demands, pulling the app from stores as it makes changes to satisfy regulators. The company said customers and drivers who have already downloaded the app won’t be affected.
The ban on Didi comes less than a week after the ride-hailing company went public on the New York Stock Exchange in the biggest US share offering by a Chinese company since Alibaba debuted in 2014.
According to a note by analysts at Shenzhen-based Ping An Securities, Didi is probably being investigated over its purchase of certain products and services from other suppliers, which Chinese regulators think can threaten national data security.
“Didi will inevitably have to check its core network equipment, high-performance computers and servers, large-capacity storage equipment, large databases and application software, network security equipment, and cloud computing services, sort them out and make necessary rectifications to meet regulatory requirements,” the note said on Monday.
— By Laura He